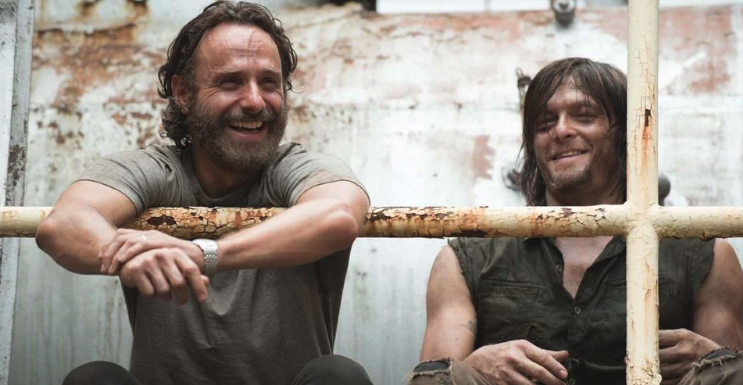 Scott M. Gimple revealed during the The Walking Dead Holiday Special that we might be getting a zombie-themed comedy. “We’re working on something with one of the great Walking Dead villains of all time, and we’re working on a straight Walking Dead comedy right now,” he said. “We’re not making fun of our world, but it’s more of a comedic take on the world.”

So what exactly is a “straight comedy”? Your guess is as good as mine, but I hope they take it all the way. I’m talking about a half hour comedy filmed in front of a live studio audience! I’m thinking a typical suburban family living in Zombie World. Maybe the dad drives to his job everyday, dodging zombies along the way. The kids might have a jawless zombie pet who lives in the back yard in the dog’s house. Mom is in a book club with her old friends who are now zombies. Heck, they can write the first couple episodes based on the gags in “Shaun of the Dead.”

And here’s an update on the Rick Grimes movie:

“Two years ago, almost to the day, I was in the wilds of England with Mr. Andy Lincoln working on the movie. And because we work in television, we thought we would be working on the second one right now. Movies take a long time, but it’ll be worth the wait. It is moving forward. The COVID time kind of slowed things down anyways, but we’re using that time to go back to the lab and make it as great as possible. I know that doesn’t give you much…but it’s happening.”