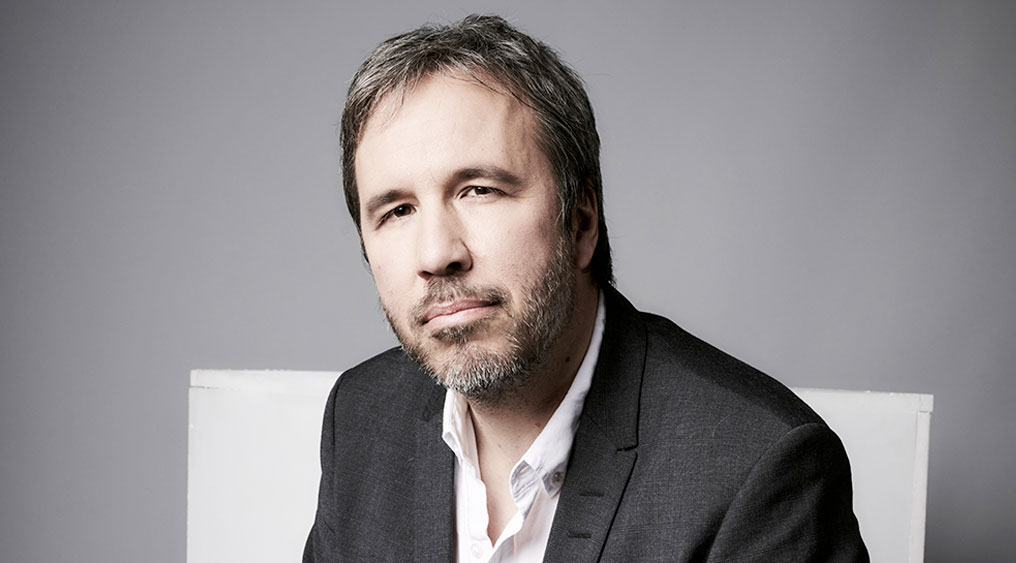 First, let’s hear from the director:

““Dune” is by far the best movie I’ve ever made. My team and I devoted more than three years of our lives to make it a unique big screen experience. Our movie’s image and sound were meticulously designed to be seen in theaters.

I’m speaking on my own behalf, though I stand in solidarity with the sixteen other filmmakers who now face the same fate. Please know I am with you and that together we are strong. The artists are the ones who create movies and series.

I strongly believe the future of cinema will be on the big screen, no matter what any Wall Street dilettante says. Since the dawn of time, humans have deeply needed communal storytelling experiences. Cinema on the big screen is more than a business, it is an art form that brings people together, celebrating humanity, enhancing our empathy for one another — it’s one of the very last artistic, in-person collective experiences we share as human beings.

Once the pandemic is over, theaters will be filled again with film lovers.

That is my strong belief. Not because the movie industry needs it, but because we humans need cinema, as a collective experience.

So, just as I have both a fiduciary and creative responsibility to fulfill as the filmmaker, I call on AT&T to act swiftly with the same responsibility, respect and regard to protect this vital cultural medium. Economic impact to stakeholders is only one aspect of corporate social responsibility. Finding ways to enhance culture is another. The moviegoing experience is like no other. In those darkened theaters films capture our history, educate us, fuel our imagination and lift and inspire our collective spirit. It is our legacy.

1. You sir, are a studio bitch

As an artist I can understand where Denis is coming from. He wants his movie to been seen in a theater. Well, more than 90% of the websites I build I do not particularly like, but it’s not MY decision. I would like 5 times the budget for these websites, have parallax and HTML5 animation going on, and BLOCK it from all phones. Do I want a really cool website like that described to be viewed on a PHONE? Hell no. But guess what? I don’t get PAID to do that. I’m a BITCH to the client. And I hate to break this to Denis, but he got paid handsomely to DO HIS JOB, and got 100’s of millions to play with. Once the film is done, IT IS NO LONGER HIS. Most directors don’t even get final cut or editing. So Denis, I understand what you WANT, but it’s not your call.

2. “I strongly believe the future of cinema will be on the big screen”

Let’s face it, good or bad, Hollywood is a BUSINESS. They want to MAKE MONEY. How do they do that? Making movies geared to 14-20 year old males.

Did anyone reading this RUSH to the theaters to see Oscar nominated “The Favourite” or maybe you were bummed that you didn’t see “Roma” in the theater, because that was a NETFIX film.

Every time you watch something at home, you WILL be missing out on the big screen experience, but it’s all about weighing the pluses and minuses. Sure, you don’t get the immersiveness, but you also don’t have to leave the house, spend too much money and deal with parking, crowds… etc. So IS the future of cinema on the big screen? I think a lot of “The Mandalorian” fans would disagree. And although that is “technically” a tv series, it’s just as big in scope as any Star Wars movie.

3. “Cinema on the big screen is more than a business, it is an art form that brings people together, celebrating humanity, enhancing our empathy for one another”

Things have been said the same about Zoos, Circuses, and live theater. (And two out of the three of those have been pretty much cancelled.) And wow, does that quote sound like it comes from a pompous ass that thinks a MOVIE is high-end art. It certainly CAN be, but 9 times out of 10 it is NOT. And since when do I have to sit in a dark huge room in sticky seats with the sound on to loud to have empathy?

I realize that in 2020 people have problems with “Dances with Wolves,” but I am going to use it as an example anyway. I saw “Dances with Wolves” in the theaters, and it was a glorious experience. The wide sweeping shot of the landscape and buffalo were amazing, I’m so glad I went to see it, even though I went alone because no one wanted to go with me. Now, I can watch it at home, on a 65 inch screen, with surround sound in 4k. The landscape and buffalo are still beautiful. My point? A theater is not a necessity. It is a BONUS, not a deal breaker.

4. “In those darkened theaters films capture our history, educate us, fuel our imagination and lift and inspire our collective spirit.”

True. If this statement were made in the 1960s.
I’m old enough to remember a time before Netflix, VOD, DVD, DVRs and even before VHS. Back then, it took YEARS for a movie to get to your TV, and even then, it was shrunk down into a tiny, grainy, awful experience on a 30 inch tube TV. Not exactly high art. However, even then, Willy Wonka and the Wizard of OZ captured my imagination, but not nearly as much as Star Wars did in 1977 on the big screen.

But today, with our 4k HUGE TVs, the home experience isn’t that much different. Especially if you actually respect cinema, and darken the lights and turn off our phones. A tall ask I know, but it IS possible.

5. Has anyone besides the film makers cry about “Wonder Woman 1984” coming to HBO MAX?

If you say you are disappointed that you can’t see Wonder Woman 1984 on the big screen, you are just missing pre-pandemic living. I can say I miss bars, but even if we were not in a Pandemic, I’d probably still be writing this at home on a Friday night. Granted, if you are some HUGE Wonder Woman fan, if given the option, you would probably want to see it in a theater, but for the rest of us, at home is just fine. Actually, it’s MORE than just fine. I, myself, am really looking forward to Christmas day watching Wonder Woman.

Dune will not come out in theaters and HBOMAX until October 1st, and who knows where we will be in 10 months? Will we all be vaccinated? Will it be perfectly safe to go back to the theaters? If yes, then why would Warner Bros/HBO MAX announce a full year of simultaneous release dates to both theaters and home? Why not just go through March or April? Disney is holding on to optimism and now pushed “Black Widow” to theaters on May 7th 2021. Will that hold? Who knows. But if it does not, Disney can always push it to Disney+ Premium in a pinch. So yes… releasing Dune on HBO MAX and theaters in October seems to be a decision made to soon.

7. There’s more going on here, and yes, most of it is about money.

Yes Denis. I feel for you. You are a victim of corporate greed and the pandemic. HBO MAX is trying to play with the big boys, and is losing. Badly. Take a look at this graph from November 2020 (from Entertainment Strategy Guy): 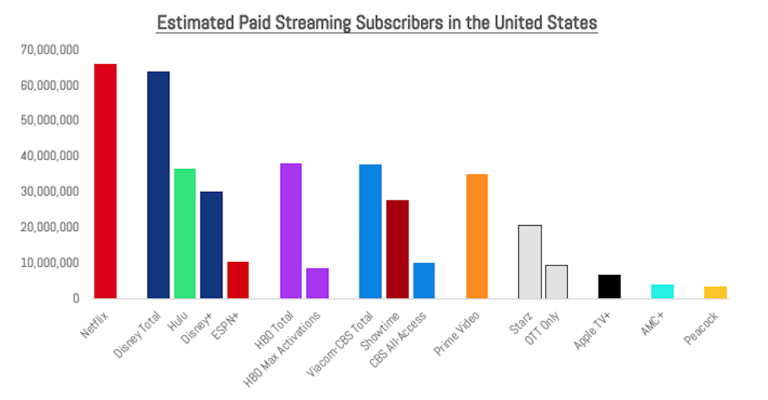 HBO MAX is a great streaming service, and I (currently) get it for free. But I have seen almost ALL HBO originals, and so I only watch it for exclusives, like “Raised by Wolves” (recommended). As much as I loved “Entourage”, “Carnivàle” and “Boardwalk Empire”, I really have no great desire to go back and watch them again, and I think most people feel the same way. I can hardly keep up with all the NEW shows on all the streaming services, never mind going back to watch a show made 20 years ago. So HBO MAX is in a pickle. They need new subscribers, and “DUNE” is a casualty of getting those new subscribers.

And… I cannot state this enough… Warner Brothers/HBO MAX OWNS THESE MOVIES. THEY ARE BOUGHT AND PAID FOR! Actors have been paid. Directors, producers, craft services, grips and best boys… ALL PAID. YOU may not like the decision to bring them to HBO MAX, and the film makers may not like it. DON’T CARE. NOT YOUR DECISION.

I feel for Denis. He is proud of the movie he made, and wants it to be seen on the big screen. But that’s it. This is not about preserving an art form, or having some sort of transcendence experience in a theater. That’s the bad news for Denis.

The good news for Denis? This decision is not set in stone. If Warner Brothers thinks that this “DUNE” be the next “Star Wars”, they will change course, and NOT release this to HBO MAX in October. But that will take time to see where we are it in the pandemic, and also see how other movies do next year, like “Black Widow” in May.

And now for the really, really good news for Denis.

He needs to see the silver lining.

Just in case you didn’t know, DUNE is a HUGE book, and Denis is making TWO Dune movies. Oh, did I bury the headline? That’s right kids. Denis’ DUNE is a two-parter. So why is this good for Denis? Well, people can watch the first movie at home, get totally “WOW”ed by it, and say to themselves, “I have to see the second one on the big screen!”

So Denis, maybe… just maybe… this could be a good thing for you. Of course, that depends on how good of a film you made.